They will continue to be here

A black smudge shoots out the back gate into the bluestone laneway. Bento is gallomping around with the un-co limbs of a fast-growing puppy sniffing this… peeing there… rubbing that… I envy her ecstasy and the bite of fresh air as I gingerly step onto the uneven cobblestones.

I trip over their bumps and cracks, hindering my progress. They used to be so solid.

Fucking vertigo, staggering like a drunk for months. The specialist is patient with my frustration. She points to an inner ear drawing on a gigantic laminated poster and explains that a virus has damaged some nerves, causing ‘retina slips’. I didn’t know until then that the inner ear stabilises the vision. Like my ears help me see and focus?

My world is slipping.
I am mis-doing, mis-placing, mis-aiming, mis-understanding.
I scrape my knee.
I am not trusted to drive.
I spill tea on my good skirt at the ACCA writing workshop.
I am doubtful about my abilities and feeling vulnerable in an exhibition about doubt and vulnerability.
Ha-ha.

Virus: an invisible non-being with awe-full, mysterious powers. A deity haunting my inner ear to teach me a lesson. Things I was taking for granted. All that was solid has become… something other.

Things I took for granted.
The solidness of stones.
A walk with Bento.

She gives me a lick and I hug her back.

Rocks are not nouns, but verbs

My eye is caught by a black and white photo of a memorial in a Japanese newspaper. A roughly hewn stone cairn, carved in old calligraphy warns that no houses should be built below this point on a hill. Shadows cast by nearby branches cut dark lines across the lettering, adding gravity to its warning. The headline says ‘Cairn Wisdom Saves.’

The headline is haiku-like, saying so much in so few words about human and more-than-human wisdoms. The article reports how the town survived the tsunami that devastated coastal towns in the northeast of Japan in 2011, by heeding the cairn’s ancient warning. Although the tsunami reached to 70m from where this cairn stands, all the town’s buildings and almost all its residents survived, safe on higher ground. They lost one family who were visiting another town.

I imagine standing in front of this stone and I am overcome with heaviness. The words are carved by human hands, but the ‘voice’ feels non-human. It is the witnessing by our ancestors, mountains and oceans. It vibrates through the materiality of the stone, its carving and weathering with a presence that is as immense as time itself. These nonhumans are here. They have always been here alongside, coexisting. They will continue to be here. To me, this ‘cairn wisdom’ combines teachings of many things, not just about the survival of towns, but wisdom about coexisting with rhythms of beings that are far larger than human scale and lifespans.

A quote by a geologist, Monica Bjorerud pops into my head: ‘Early in an introductory geology course, one begins to understand that rocks are not nouns but verbs … bear[ing] witness to events that unfolded over long stretches of time.’ Rocks grow as if they are living. In Japan, Sazareishi are awe-inspiring rocks often marked with a twisted rope made of rice stalks and paper as a sacred entity of ‘aliveness’. These are considered deities in indigenous and ancient Shinto spirituality.

Rocks are not nouns but verbs.

Not a noun but verb

Volcanic, Odawara beach, Japan
Moving with you too 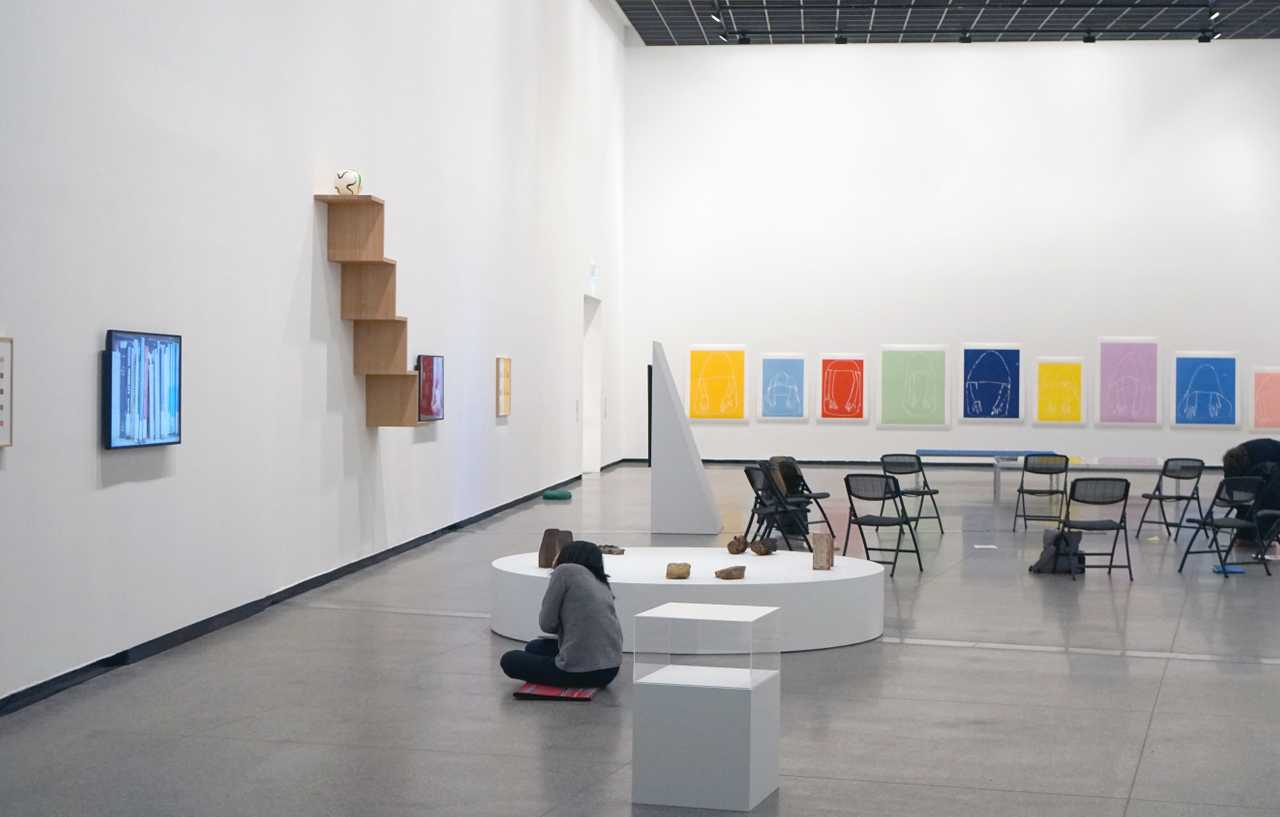 We are on the land of the Kulin Nation. These stones have witnessed and participated in sudden and slow changes to this planet. They are our ancestors. Lest we forget to feel their presence.